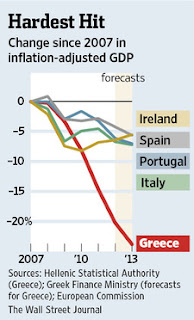 Maria Katri sent her son to live at a charitable home for poor boys after Greece's economy crashed.

Now, as Greece slides deeper into depression, the widowed mother is so poor that her teenage daughter, who stills lives at home, is "jealous that her brother is having a better time than her in the institution," Ms. Katri says.

The spread of economic hardship is fraying Greece's social fabric and straining its political cohesion as the country enters the harshest winter of its three-year-old debt crisis. Even the tightknit Greek family—an institution that has helped the population to absorb a collapse in employment—is under pressure as household incomes dwindle.

Many families are sliding down the economic ladder that their parents and grandparents climbed, often making them reliant on those same retirees' shrinking pensions. Already-poor families are slipping off the ladder, into the arms of overburdened charities. In a country of 11 million, only 3.7 million people have jobs, down from 4.6 million four years ago. Economic activity has shrunk by over 20% in that time.