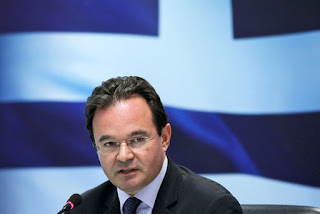 A corruption scandal involving a list of thousands of Greeks with Swiss bank accounts took a new turn Friday, focusing on the former finance minister who received the list on Greece's behalf.

Cousins of then-finance minister George Papaconstantinou were among the names of Greeks associated with 2,062 offshore banking accounts on a list that France handed over to Mr. Papaconstantinou in 2010, a Greek court official and a senior government adviser said Friday. A version of the list that was later handed to prosecutors didn't include three accounts associated with the relatives, the officials said.

Mr. Papaconstantinou, who negotiated Greece's first international bailout and was unpopular in the country for presiding over the government's first round of austerity measures, has denied any wrongdoing. He hinted that others were seeking to incriminate him.

"I have not made any intervention in the details that I asked for and received from the French authorities," Mr. Papaconstantinou wrote on his personal website Friday. "If there are accounts on the list that relate to people in my wider family environment, this is something that I did not know of until today."

Friday's allegations stoked public scorn toward politicians and deepened the saga surrounding the list of Greeks with Swiss accounts that Christine Lagarde, then the French finance minister, handed over to Mr. Papaconstantinou.