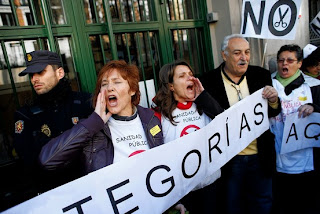 With three days left of the old year, there's still time for even this prediction to go awry. But let's stick our necks out: Contrary to some expectations, the euro zone will end the year as it entered it—with 17 members.

What this column described a year ago as "the unswerving commitment of euro-zone leaders to muddling through" has bought the common currency another year at least. And here, in ascending order of importance, are the six events that ensured the bloc's survival through 2012.

March 9: Greece completes the largest sovereign-debt restructuring in history. This was significant not because it resolved Greece's debt overhang: Nobody thought wiping 53.5% of the face value of most of the country's €206 billion ($272 billion) debt to private investors was a long-term debt solution, as a subsequent bond buyback emphasized. But it bought time for politics by lessening tensions over whether Greece would be able to meet a heavy debt-repayment schedule.

Sept. 12: Germany's constitutional court backs the euro-zone's permanent bailout fund. Few analysts thought the court in Karlsruhe would decide that the European Stability Mechanism was unconstitutional, but an adverse ruling would have thrown the bloc's crisis-management plans into disarray. The ESM started operation on Oct. 8, after ratification by all 17 member states. 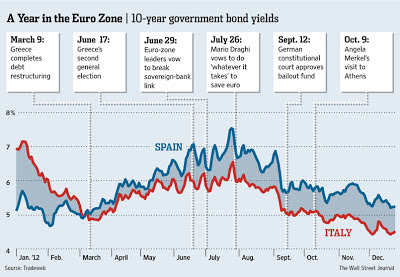 Posted by Yulie Foka-Kavalieraki at 2:35 AM