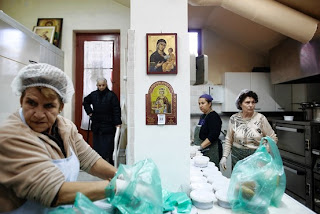 In the basement of St. Varvaras church, Rev. Theodoros Georgiou issued instructions on a recent morning to volunteers preparing hundreds of packages of food for local families, as two phones on his desk buzzed with more calls about supplies for Greece's growing ranks of the needy.

"We do not solve the problems here," Father Theodoros said. "We put out fires."

As unemployment has mounted in recession-hit Greece, so have poverty and hunger in Father Theodoros's once firmly middle-class parish in the Greek capital. His congregation's philanthropic resources have been stretched to the limit, he says, as it contributes to churchwide efforts to feed 10,000 people a day across Athens—which in turn is part of what Greek Orthodox Church officials say is the biggest mobilization to help the disadvantaged here since the aftermath of World War II.

Critics complain that the church isn't doing enough, however. In a country where the state is nearly bankrupt and its political forces are splintered, the church remains a powerful and unifying institution—one that these people say must reassess its contribution not only to the nation's spiritual needs, but also to its worldly salvation.

"Greek people expect their church to go out of its way to help Greek society endure and recover," said Aristides Hatzis, an associate professor of law, economic and legal theory at the University of Athens. "This is a national emergency."

More
Posted by Aristides N. Hatzis at 8:26 AM