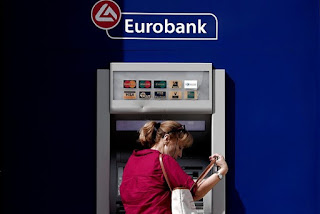 Greece's four largest banks need a capital boost of €27.4 billion ($36.29) to overcome the impact of the country's sovereign debt write-down as they battle to stem growing losses in the rapidly shrinking domestic economy.

A mammoth €200 billion debt restructuring completed by the country earlier this year wiped out the capital base of Greece's top lenders—National Bank of Greece, Eurobank Ergasias, Alpha Bank and Piraeus Bank — forcing them to appeal to the government for help.

On Friday, NBG said it requires a capital boost of €9.7 billion while Alpha needs a capital injection of €4.6 billion. This comes after Eurobank and Piraeus Bank said Thursday they need €5.8 billion and €7.3 billion respectively.

"The total number seems to be at the high end of expectations," said Panagiotis Kladis, an analyst at investment services company National P+K.

"This is a lot of money and investor interest in these banks will be determined by economic conditions prevailing in coming months and the economy's broader outlook."