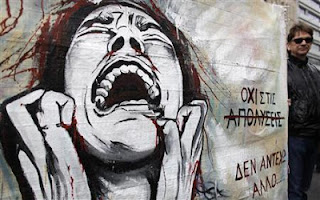 Greece has scored the worst ranking of all 27 European Union nations in a global league table of perceived official corruption, falling below ex-communist Bulgaria as public anger about graft soars during the country's crisis.

Releasing its annual corruption perceptions index, Berlin-based TI urged European and other governments to try much harder to turn promises of fighting graft into action in areas such as public tenders, political party financing and tax evasion.

"The results of the survey should be a warning signal for the EU to require more information and accountability from its member states," said TI's EU analyst Jana Mittermaier, adding that this should apply also to current efforts to establish European banking oversight.

Weak or inefficient judicial systems, poor public audit services and cozy ties between government and business all contribute to perceptions of corruption in some European countries, she said.

Read the Report
Posted by Yulie Foka-Kavalieraki at 10:52 AM