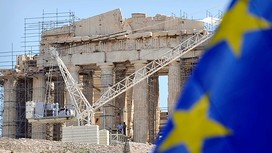 Next year will be “a make or break” year for Greece’s future as a member of the eurozone, the country’s finance minister has said, warning Europe’s leaders that Athens still faces “the possible risk” of crashing out of the currency bloc.

“We can make it next year if we can stick to the programme agreed with the EU and IMF,” Yannis Stournaras said in an interview with the Financial Times.

However, “the break would be if the political system finds the situation too difficult to handle”, he added, referring to the danger of social unrest about austerity that could force the two left-of-centre parties to bring down the governing coalition.

“What we have done so far is necessary but not sufficient to achieve a permanent solution for Greece,” Mr Stournaras said. “The issue now is implementation.”

The minister’s warning pierces the prevailing optimism about Greece, whose 10-year bond yields fell to an 21-month low on Wednesday after the European Central Bank said it would once again accept the country’s sovereign debt as collateral.