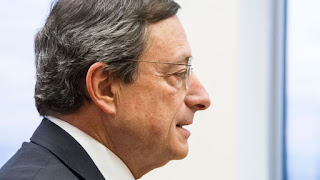 On the eve of the 2012 Olympic Games, Mario Draghi found himself in the august setting of Lancaster House in the heart of London’s royal district. He was a panellist at an official event intended to drum up foreign investment to the UK, but the president of the European Central Bank had weightier matters on his mind.

Europe’s single currency was disintegrating amid soaring borrowing costs in Greece, Spain and Mr Draghi’s native Italy. Speculation that the eurozone was heading for a break-up, with incalculable financial and political consequences, was rampant. It was time to draw a line in the crisis.

“Within our mandate, the ECB is ready to do whatever it takes to preserve the euro,” Mr Draghi said, pausing for effect. “And believe me, it will be enough.”

Mr Draghi’s advisers had been forewarned that he was preparing to make a forthright statement, but none had been apprised of the precise wording. In retrospect, the July declaration – which in effect dared financial markets to challenge the ECB’s unlimited firepower – may well be seen as a turning point in the three-year-old crisis.

“What I thought was that the markets should know what our stance was,” Mr Draghi, 65, recalls in an interview with the Financial Times in his office on the 35th floor of the ECB’s Frankfurt headquarters. Asked if he had rehearsed his pause, he laughs. “No, I’m not really that theatrical.”

Read the Interview
Posted by Yulie Foka-Kavalieraki at 9:50 PM