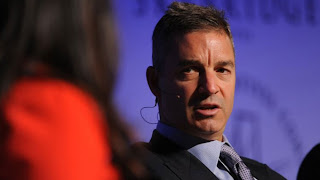 In Quentin Tarantino’s film Reservoir Dogs, Mr Pink gets away with the diamonds. His co-conspirators are left bloodied and dying.

When he was starting out as a hedge fund manager in the 1990s, Daniel Seth Loeb used to stalk investing chat rooms and message boards with an online persona: Mr Pink.

Mr Loeb has always evaded questions on the nom de plume, but it stuck as a nickname. And he appears to be living up to it.

This week the 51-year-old, now one of Wall Street’s most successful investors, scooped up a $500m windfall for his clients in a bond buyback deal with the Greek government.
Dozens of hedge funds have been burnt trying to play the eurozone crisis but Mr Loeb’s Third Point is not one of them.

The trade in Greek government bonds, which saw a handful of canny investors double their money, has been the single most successful hedge fund bet in two years – a period during which most hedge fund managers have struggled to navigate rocky markets, grinding out meagre returns.