Europe to Back Greek Aid Release 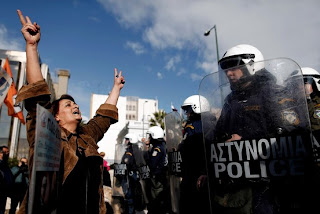 Euro-zone finance ministers are set on Thursday to back the release of another batch of aid to Greece, although its bond-buyback operation fell short of expectations and left the country likely to need more financial assistance and further measures to reduce its debt.

Euro-zone leaders and the International Monetary Fund agreed last month to provide the next installment of about €34 billion ($44 billion) in loans if Greece met certain economic conditions and retired a sizable portion of its private-sector debt by buying back its bonds at deep discounts to face value.

Athens disclosed Wednesday that the buyback fell shy of expectations because Greece had to pay a higher-than-intended price to buy about €31.9 billion in bonds.

Germany and the IMF lauded the bond repurchase as a success, although documents from the Greek government and its troika of official creditors—sent by the German finance minister to Germany's parliament on Wednesday, and reviewed by The Wall Street Journal—showed that Greece would miss its targets. The troika comprises euro-zone national governments, the IMF and the European Central Bank.

The buyback is expected to reduce Greece's debt to 128% of gross domestic product by 2020, slightly higher than the original target of 124%, the documents showed.