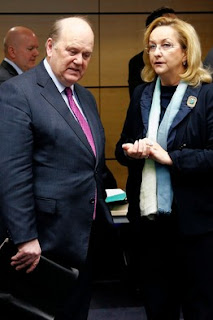 European Union finance ministers reached a landmark deal early Thursday that would bring many of the continent's banks under a single supervisor, in what governments hope will be a major step toward resolving their three-year-old debt crisis.

Ministers said the European Central Bank would start policing the most important and vulnerable banks in the euro zone and other countries that choose to join the new supervisory regime next year. Once it takes over, the ECB will be able to force banks to raise their capital buffers and even shut down unsafe lenders.

German Finance Minister Wolfgang Schäuble said national parliaments will be able to ratify the new supervisor by the end of February and "we should have the supervisor in place by the first of March."

The EU's Internal Markets Commissioner Michel Barnier, in a tweet, called the agreement "historic." "Taking these decisions on the supervisor was a night well spent," he added.

With the deal, which still needs to be signed off by the European Parliament, the currency union has cleared the first real hurdle on the road to a "banking union," designed to cut the debilitating link between weak banks and their governments.