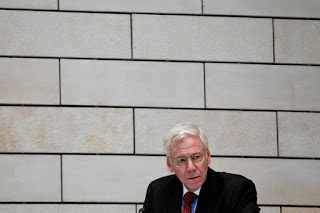 Greece, under pressure from its European creditors, wanted to retire some of its debt by buying back its bonds at a deep discount to their face value. A senior executive at Deutsche Bank proposed that Europe take a tough negotiating stance toward private hedge funds that had bought Greek bonds. He urged officials to use a legal mechanism that would force the funds to sell at a lower price than they might voluntarily accept.

The move was “perfectly legal” and would not “upset the markets,” the executive, Hakan Wohlin, argued. And by forcing private investors to sell low — for 28 to 30 cents on the euro, instead of the 34 to 35 cents many hedge funds were aiming for — Greece could achieve significant debt reduction at a reasonable cost.

But in this latest showdown with private investors over Greece’s debt, Europe blinked first.

When the results were tallied on Dec. 12, Greece had reached its target of buying back enough bonds at a discount to retire 21 billion euros, or about $27 billion, of its debt. The bigger winners, though, were hedge funds, which pocketed higher profits than many had expected, in yet another Greek bailout financed by European taxpayers.