Greek government bonds were one of the worst-performing investments in 2011, but in the past 12 months this trend has reversed. Intervention by the European Central Bank to prevent a break-up of the euro area has helped the bonds of peripheral nations to rally. Buyers of Turkish and Nigerian equities saw a similar turnaround. Thanks to the yuan’s appreciation and reinvested dividends, investors in Chinese shares also got a bounce in dollar terms, even though local indices have fared poorly. In America bond returns easily outshone those of equities in 2011, but in 2012 equities beat bonds by 14 percentage points. Commodities continued to be a poor investment, falling slightly for the second year in a row. 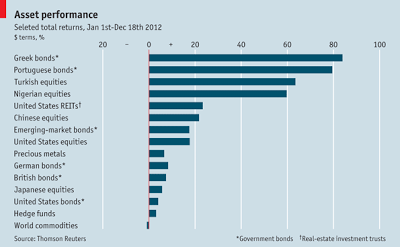