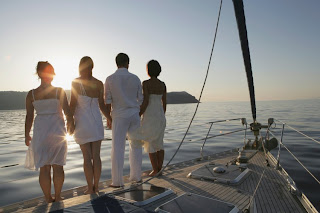 Average Greeks are reeling under the strict austerity measures passed in order to balance the country's budget. Top earners, on the other hand, continue to evade the tax man. Most of the self-employed in Greece significantly underreport their earnings, whereas shipping magnates enjoy generous exemptions.

The principle of tax justice may be enshrined into the Greek constitution, but it has become increasingly obvious that not all Greek taxpayers are created equal. Currently, the government in Athens is preparing yet another round of harsh austerity measures, severely testing the cohesion of both the coalition and society. Already, such measures in combination with tax hikes have slashed average household income in Greece by half since the beginning of the crisis. Measures now planned will see pensions sink by 25 percent.

At the same time, though, a small elite of wealthy Greek ship owners is fighting to defend its tax-free status -- also, ironically enough, enshrined in the constitution. Meanwhile, other moneyed Greeks, including doctors, lawyers and engineers, continue to systematically avoid taxes. According to a recent study, seven out of 10 self employed Greeks significantly underreport their earnings. Indeed, though the crisis has been raging for five years now, many wealthy Greeks are under no more pressure to pay taxes than they were before.

The study's authors use data from a large Greek bank which uses several factors in addition to income reports to measure a client's creditworthiness. The result: Undeclared income from self-employed Greeks amounted to €28 billion in 2009, more than 10 percent of the country's gross domestic product that year. The state lost €11.2 billion euros in tax revenues as a result.

Doctors lead the way: Their real income is almost 2.5 times higher than the amount they declare. Lawyers are not far behind, with economists, journalists, and those in the entertainment business rounding out the top slots on the list. "Tax evasion is not limited to the wealthy," the study finds. "But tax evasion does increase in wealth, substantially."

How, though, given Greece's attempts in recent years to shore up tax revenue, is this still possible? A lawyer in Thessaloniki who wished to remain anonymous says it is really quite simple to cheat on taxes. "Until recently, there was a minimum fee of €300 for presenting a case in court. Big-shot lawyers would charge their clients thousands of euros, yet would only give a receipt for €300. I know of wealthy lawyers who have been in the business for 30 years who do not pay a single euro in taxes. Some of them even boast of getting tax returns."