According to Henry Kissinger's famous (yet apocryphal) joke, there is no telephone number for Europe. US Treasury Secretary Tim Geithner, however, seems to have resolved Kissinger's dilemma by calling not one number but dozens. This, at least, is what his official schedule indicates: from January 2010 to June 2012, the last date for which his calendar is publicly available, he had no fewer than 168 meetings or phone calls with euro-area officials, plus 114 with the International Monetary Fund. And the person he spoke to most often, apart from the IMF chief, was the European Central Bank president.

I had the idea to examine this data when I was recently asked to speak at a conference on the US and the euro-area crisis. I was looking for some sort of quantitative evidence of the involvement of the Obama administration in the European discussion, and thought the frequency of these contacts would provide an informative indicator. Obviously, the calendar does not indicate what the subject matter of discussions was. But what else could have justified 58 contacts in 30 months between Tim Geithner and the ECB’s successive presidents, Jean-Claude Trichet and Mario Draghi? Admittedly, he may have had a more diverse array of topics to discuss with German Finance Minister Wolfgang Schäuble (36 contacts) or his French counterparts (32 contacts). But why would have he called them significantly more than the UK Chancellor of the Exchequer (19 contacts), with whom euro-area issues must also have been discussed? The one institution with which he certainly addressed other issues is the IMF (114 contacts with successive Fund chiefs Strauss-Kahn and Lagarde, and deputies Lipsky and Lipton), but here again, knowing how concentrated on Europe the IMF has been in recent years, the euro crisis certainly featured high on the agenda. 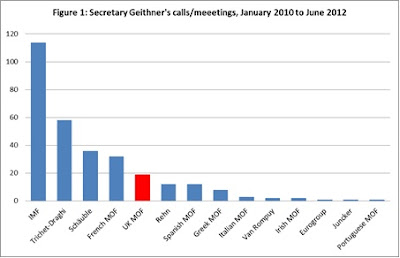 Posted by Yulie Foka-Kavalieraki at 1:28 PM