The Myth of Austerity

Many politicians and commentators such as Paul Krugman claim that Europe's problem is austerity, i.e., there is insufficient government spending. The common argument goes like this: Due to a reduction of government spending, there is insufficient demand in the economy leading to unemployment. The unemployment makes things even worse as aggregate demand falls even more, causing a fall in government revenues and an increase in government deficits. European governments pressured by Germany (which did not learn from the supposedly fateful policies of Chancellor Heinrich Brüning) then reduce government spending even further, lowering demand by laying off public employees and cutting back on government transfers. This reduces demand even more in a never ending downward spiral of misery. What can be done to break out of the spiral? The answer given by commentators is simply to end austerity, boost government spending and aggregate demand. Paul Krugman even argues in favor for a preparation against an alien invasion, which would induce government to spend more. So the story goes. But is it true?

First of all, is there really austerity in the eurozone? One would think that a person is austere when she saves, i.e., if she spends less than she earns. Well, there exists not one country in the eurozone that is austere. They all spend more than they receive in revenues. 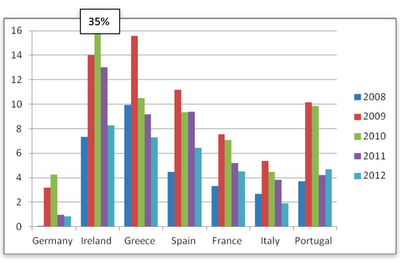