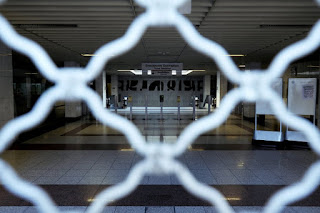 Thousands of Greeks took to the streets of Athens on Tuesday on the first of two days of strikes to protest yet more biting austerity measures. Their anger is palpable, but if parliament fails to pass the cuts on Wednesday, the consequences could be dire.

Hundreds of thousands of Greeks began a 48-hour nationwide strike on Tuesday, shutting down schools, banks, local government offices and ports to protest the government's latest round of austerity measures.

Transportation in Athens became difficult as subway and taxi services were halted and flights in and out of the country were stopped for three hours early in the day. State hospitals were running on emergency staff.

About 16,000 people gathered at a union-organized protest outside parliament in Athens, where lawmakers on Wednesday will vote on the law, chanting slogans like, "People, don't bow your heads!" and "This strike is only the beginning!" Several thousand more marched in a separate demonstration in Athens, and about 20,000 protested in Greece's second-largest city, Thessaloniki.

In addition to further tax hikes and cuts to pensions, the expected measures will raise the retirement age from 65 to 67 and make it easier to fire or transfer civil servants. Altogether they are aimed at saving the state €13.5 billion ($17.3 billion) and are a key condition of Greece's international creditors to continue to receive emergency bailout funds.