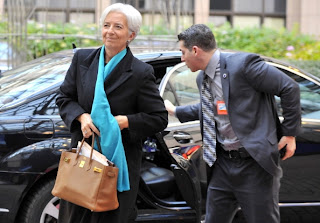 When eurozone finance minsters announced their long-delayed deal to overhaul Greece’s second bailout early Tuesday morning, there was much they didn’t disclose.

The most glaring was how big a highly-touted bond buyback programme would be, a question dodged repeatedly at a post-deal news conference. But there were other things that were left out of a two-page statement summing up the deal, including how much the European Central Bank was making on its Greek bond holdings, profits that will be returned to Athens as part of the agreement.

It turns out, those were not the only – or even the biggest – unanswered questions left after the early-morning deal. As we report in today’s dead-tree edition of the FT, ministers failed to find enough debt relief measures to get to the purported Greek debt target of 124 per cent of economic output by 2020, far above the 120 per cent target set in February.

In reporting our story, we relied heavily on a leaked chart that we got our hands on (which we’ve linked to here) that lays out in great detail the assumptions built into the new programme. A quick review of the chart comes after the jump...