More Greek myths: The need to speak truth to weakness 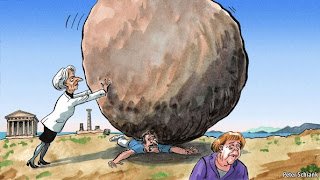 When the euro zone rescued Greece in 2010 Germany insisted on enlisting the IMF. Some worried about letting the Washington-based institution meddle in Europe. But Germany wanted the IMF as external enforcer, to impose rigour not only on Greece but also on the soft-hearted European Commission.

More than two years later, the enforcer has at times been Greece’s main helper. It has sought to ease the pace of austerity. And it has been at odds with Germany over the hitherto unthinkable: the need to write off some of the billions that Greece still owes. In a string of late-night meetings in Brussels, Christine Lagarde, the IMF’s boss, has injected some common sense into the latest rescue of Greece, finalised this week. Greece has been given more time to reach its budget targets, and the terms of euro-zone loans have been softened. For all the doubts about whether the latest numbers add up, something important has happened: the euro zone has come to accept that Greece cannot bear the burden of its debt, and that creditors will have to take losses.

This is not how it was meant to be. Bringing in the experience of the IMF was intended to safeguard German taxpayers’ billions. Angela Merkel, the German chancellor, claimed other vulnerable countries would be dissuaded from asking for bail-outs because they would see that “the path taken by Greece with the IMF is not an easy one”. Instead the crisis worsened (Cyprus is about to become the fourth country to receive a bail-out) and the European Central Bank has had to step in. On November 28th the European Commission proposed a step-by-step blueprint to fix the underlying flaws of the euro. It includes an embryonic euro-zone budget in the next 18 months and a pooling of euro-zone debt in the next five years. In the long term, it wants a “deep and genuine” economic and monetary union, with a euro-zone budget financed by its own taxes and full-fledged joint Eurobonds.