In the End, Greek Crisis Will Hit Taxpayers 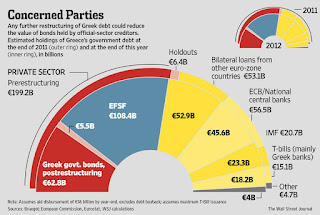 Sovereign-debt crises always spark struggles between creditors and debtors over who should suffer losses.

Since the Greek crisis exploded nearly three years ago, those fights have played out in euro-zone summits and finance ministers' meetings and have been covered feverishly by the global media. Because of the large number of parties with stakes in the outcome—Greece and 16 other members of the euro zone, the European institutions and the International Monetary Fund—they have been even more complicated than usual.

Despite the complications, this week's deal on Greece's debt points to an (almost) iron rule of sovereign-debt crises: Significant losses fall on taxpayers in creditor countries because debt originally extended by private creditors, one way or another, ends up on the balance sheet of the public sector.

Euro-zone governments haven't publicly admitted that they expect to suffer losses, but that is the almost inevitable conclusion from the agreement on Greece reached by finance ministers in the early hours of Tuesday. Even if ministers aren't admitting it now, they will have to at some more politically convenient point.

More
Posted by Yulie Foka-Kavalieraki at 7:07 AM