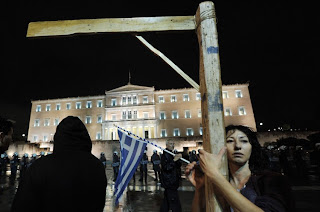 The Greek parliament on Wednesday night passed yet another package of deep cuts in order to qualify for the next tranche of vital euro-zone aid. But the coalition of Prime Minister Antonis Samaras showed signs of fracturing, while protests on the streets outside grew violent.

Residents of Athens on Thursday woke up to more chaos. For the third straight day, subways, commuter trains and taxis were on strike, leading to gridlocked traffic as those needing to get to work took to their cars.

The more significant bedlam, however, took place the previous evening in parliament and on the streets outside. Greek lawmakers passed yet another painful austerity package on Wednesday night worth €13.5 billion ($17 billion) over two years, an important step toward receiving the next €31.5 billion tranche of European Union aid money. But the vote revealed signs that Prime Minister Antonis Samaras' governing coalition could be fracturing, while 80,000 protesters demonstrating in central Athens reminded leaders that biting austerity is also taking its toll on Greek society.

Samaras did his best to exude confidence, saying the bill "will finally rid the country of drachmophobia." He added that "many of these measures are fair and should have been taken years ago, without anyone asking us to. Others are unfair -- cutting wages and salaries -- and there is no point in dressing this up as something else."

But, he noted, the alternative was a Greek bankruptcy -- looming, Athens says, as early as the end of next week should the EU continue to withhold funding.