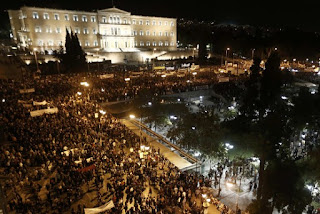 Greek lawmakers approved a multibillion-euro austerity package, clearing the way for the country to secure more bailout funds, but the measures also threaten to deepen the country's brutal recession and destabilize the country's fragile politics.

Violent clashes erupted between riot police and protesters as tens of thousands gathered in the square outside Parliament to voice their opposition as politicians inside debated legislation that would impose deep cuts in pensions and public-sector wages and clear the way for laying off thousands of civil servants.

For more than an hour, police staged running street battles with hundreds of hooded, self-styled anarchist youth in and around the square, firing volleys of tear gas and stun grenades as protesters hurled rocks and Molotov cocktails. Even as the clashes spread outside, a stormy parliamentary debate inside was interrupted by an impromptu strike by parliament workers objecting to a last-minute amendment by the government to bring their wages in line with the rest of the public sector.

The package will deal a fresh blow to an economy whose output has shrunk by more than a fifth since the country's debt crisis began. The government says the cutbacks will contribute to a 4.5% contraction next year, but many economists argue the damage could be much greater.

"Greece Drinks the Hemlock" is the title of the NYT-editorial on the passing of austerity measures. I consider the following sentence as the most important one:

"Greece cannot pay off its debts when it is shutting down its economy. It has to put people back to work".

And the sentence following the above I consider the most questionable one:

"The only way forward is through more debt write-offs and more low-interest European loans, as well as by opening up restricted job markets".

Even if all of Greece's debt were forgiven, it wouldn't change much in the functioning of the Greek economy. If all restricted job markets were opened up overnight, it might change something but I would only believe it when I saw it.

Either way, the Greek economy would continue to be an economy which does not generate enough value to justify the standard of living which Greeks justifyably desire. There simply is not enough domestic production to satisfy a greater portion of domestic demand (making horrendous imports necessary and underutilizing domestic resources) and there certainly is not enough domestic production to generate the amount of exports necessary to justify the desired imports. And with all that underutilization of resources, chronic unemployment cannot be avoided.

Thus, I return to the 'early promising signals' which I have described in a previous post. A better future for Greece can be expected when the following sentiments are felt throughout Greek society:

If and when that happens, the issue of a debt write-off (which may still be necessary) will become a side issue. Creditors have already accepted the fate that existing debt must be considered - to a large extent - as 'spilled milk'. The difference is that foreigners (creditors and, above all, investors) will be happy totransfer Fresh Money to Greece because they can have the confidence that the money is well spent.