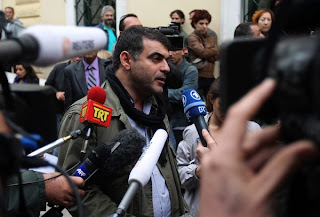 An Athens court on Thursday acquitted a Greek journalist accused of breaching privacy and data protection laws for publishing a list of more than 2,000 Greeks with Swiss bank accounts.

The trial, an exhausting and at times comic 11-hour spectacle, raised questions of Greece’s press freedom and failing attempts to tackle tax evasion. It also touched off debate over what pundits, politicians and defense attorneys deemed “an unapologetic” use of force and influence by the state to cover up corrupt political practices.

If convicted, Kostas Vaxevanis, a prominent investigative journalist and publisher of Hot Doc magazine, would have faced a minimum 12-month imprisonment, plus a fine of $39,000.

“The court finds you innocent,” the presiding judge told Vaxevanis, offering no legal reasoning for her decision.

Since his weekend arrest, the 46-year-old journalist has insisted that the list he published was identical to a roster of names and data the Greek government was given two years ago by then-French Finance Minister Christine Lagarde to pursue tax cheats.
There was no suggestion that the 2,059 Greek holders of HSBC bank accounts in Geneva were tax cheats. Still, in the course of Thursday’s heated hearing, defense attorneys and a key political witness argued that the list had been shelved, with politicians failing to probe potential tax evasion.