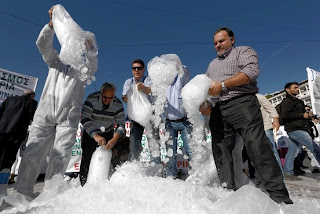 Greece's Parliament narrowly approved a law Wednesday that gives the government greater flexibility to privatize the country's public utilities as euro-zone finance ministers all but ruled out a proposal to reduce the amount of debt that Greece owes them.

The fractious vote over a privatization program that is already way off track underscored a widening rift within Greece's ruling coalition a week ahead of a critical vote on an austerity and reform package needed to secure bailout funds. On the same day, other euro-zone governments put further pressure on Greece to meet tough conditions in return for the new aid.

In a conference call on Wednesday, finance ministers agreed in principle to extend the repayment periods for the bailout loans Greece has received from the euro-zone and showed broad backing for a further cut in interest rates on these loans, according to two European officials.

They said an idea was also gaining traction for Greece to reduce its debts by offering to buy back bonds from private investors and central banks at a discount to their face value—though there remained questions about how such buybacks would be financed.

Posted by Yulie Foka-Kavalieraki at 12:34 PM