Greece’s debt burden: How to end the agony 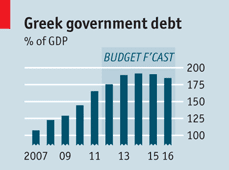 A general strike; protesters on the streets; parliamentary battles over austerity measures needed to unlock rescue funds; and a sinking economy with an ever bigger debt burden. The situation in Athens this week is grimly familiar—and not just because Greece has had so many similar weeks over the past couple of years. There are also eerie echoes of the developing-country debt crises of the 1980s and 1990s.

The experience of dozens of debt-ridden countries in Latin America and Africa holds lessons that Greece’s rescuers ought to heed. For years, the IMF and rich-world governments tried to help them with short-term rescue loans. But the most indebted started to recover only when their debts, including those owed to official creditors, were slashed. In Europe, Poland also provides a precedent: its economy took off in the 1990s after it too was given a break by its creditors.

Greece is in the same boat. Provided that the country’s parliament passes the 2013 budget on November 11th, a fresh infusion of rescue funds will stave off imminent catastrophe (see article). Yet Greece’s economy won’t recover until it has more debt relief. That should involve, broadly, a two-part process: first, agree on a plan to reduce debt if certain targets are met; then cut the debt in stages over the next decade.