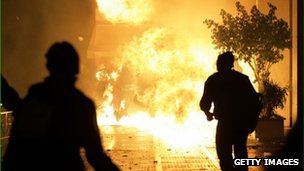 Greece is to make an urgent bid to raise funds from the financial markets in case it does not get another tranche of bailout aid in time to repay debts.

On Tuesday, it plans to issue bonds, repayable in one and three months, to cover debt repayments due on Friday.

Greece is negotiating to secure aid worth 31.5bn euros from the European Union and International Monetary Fund.

Without the aid, heavily-indebted Greece would face bankruptcy.

Manos Chatzidakis, an analyst at Beta Securities in Athens, said the four-week treasury auction was an unusual but necessary step.

It would keep Athens afloat until leaders of the eurozone meet on 26 November to approve payment of the latest rescue loans. Despite the Athens Parliament passing the hugely unpopular austerity cutbacks, the EU, IMF and European Central Bank are still reviewing the country's finances.