Greece Prepares to Vote on $23 Billion in New Cuts 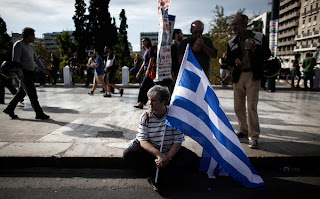 Destabilized by scandals yet held together by a lack of alternatives, the Greek government prepared to push a raft of politically toxic new austerity measures through Parliament on Wednesday, a move aimed at securing international financing and ensuring that the debt-racked nation will remain in the euro zone.

But some members of Prime Minister Antonis Samaras’s fragile three-party coalition government were expected to break ranks and vote against the measures, reviving questions about how long the coalition can hold together.

On the streets, austerity-weary Greeks kicked off two days of nationwide strikes on Tuesday to protest the new measures, which will total $23 billion over the next four years.

The measures, which are expected to pass by a razor-thin margin in Parliament, are required to unlock $40 billion in rescue financing that the country needs to meet expenses. The European Union’s commissioner for economic and monetary affairs, Olli Rehn, said in Brussels on Monday that lenders were on track to release the aid.