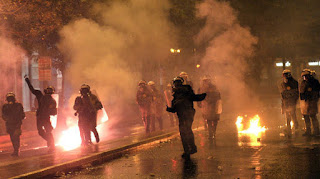 As tens of thousands of protesters shouting "Resist!" swarmed the streets outside, Greece's Parliament on Wednesday narrowly approved its toughest batch of spending cuts yet in order to secure vital bailout funding from its European peers.

The legislation, including a controversial slate of fiscal and structural measures intended to save the state about $17 billion and ward off a messy financial collapse, was backed by 153 lawmakers of the 300-seat Parliament. Voting no were 128 lawmakers, including three from the conservative and leftist parties supporting the ruling coalition government.

But, he added, punching the air emphatically with his index finger, "they will be the last.... [They] will reverse the economy's free-fall."