Greece: It’s Not About the Numbers 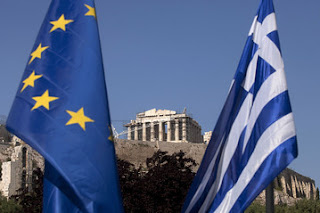 The spreadsheets spell it out clearly. Billions of euros of austerity measures on top of an already fast shrinking economy have made the country’s growing debt pile unsustainable.

As this leaves euro-zone countries to squabble with the IMF over how to reduce Greek debt, self-professed international experts continue to play the same old tune: the country’s only path to economic salvation is to leave the single currency zone.

They argue a devaluation of the national currency will boost competitiveness, exports would rise and foreign investors will snap up dirt cheap assets, contributing to job growth and economic expansion. These arguments are economically sound but overly simplistic, others argue.

Many analysts, both here in Greece — but also abroad — argue that Greece’s place in the euro zone is also crucial to ensuring Greece’s continued political stability, as well as its geopolitical influence in the volatile region of Southeast Europe and the eastern Mediterranean.

Exiting the euro could send the country into an uncontrolled tailspin for decades, they say, and warn that such a free fall that could prompt internal strife, that might even spill over into neighboring countries.