Greece and the euro: Toil and trouble 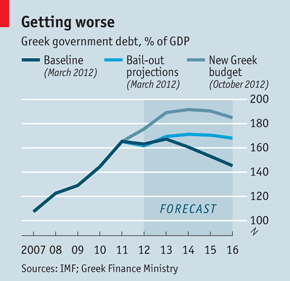 Greece’s fragile coalition government only narrowly averted disaster on November 7th when it won parliamentary approval for a drastic new austerity package. The package scraped through with 153 votes to 128 in the 300-member house.

Antonis Samaras, the prime minister, made the best of it, saying that “Greece has turned a page.” Meanwhile furious anti-austerity protesters outside parliament hurled stones and Molotov cocktails at police in what has become a grim ritual.

The debate over the latest austerity measures, the toughest yet, had turned angry even before lawmakers studied the 500-page “poly-law” before them. Presenting the four-year programme to parliament’s economics committee, Yannis Stournaras, the finance minister, fended off attacks from Syriza, the leftist opposition party, pointing out that if it were voted down Greece would lose a desperately needed €31.5 billion ($40 billion) slice of its bail-out funding, would default on its next debt repayment and would surely then make a disorderly exit from the euro.

Mr Stournaras had gradually given ground over four months of negotiations with the “troika” of the European Union, the European Central Bank and the IMF on the package to be implemented in 2013 and 2014. Greek proposals for cuts in government operating costs were rejected as unrealistic. So they were replaced by “permanent” spending reductions, code for slashing salaries and pensions. 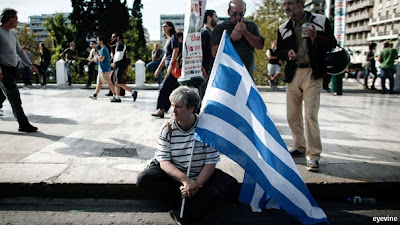