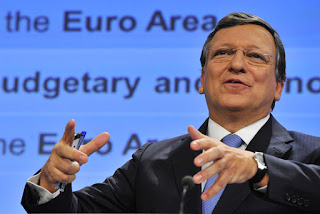 European officials proposed an overhaul of euro-zone institutions that would create a common budget for the 17 nations using the common currency and, ultimately, grant powers to issue debt collectively backed by the currency bloc.

The European Commission's blueprint is one of several competing visions for how to fix deep flaws in the euro zone that have been exposed by the debt crisis.

While none of the proposals that emerged on Wednesday for completing economic union is entirely new, European institutions had been unwilling to attach a timetable to them.

Euro-zone leaders will talk about early steps to that end, including setting up a single policeman for the bloc's banks, at a summit in mid-December.

Parts of Europe are sure to view the plan mapped out by the Commission, the European Union executive, with extreme skepticism.

It is likely to be controversial in Germany, the Netherlands and other nations that are wary of using their strong public balance sheets to support the euro zone's weaker nations.

"We are now launching this debate, not just with slogans but with a document," European Commission President José Manuel Barroso said at a news conference.