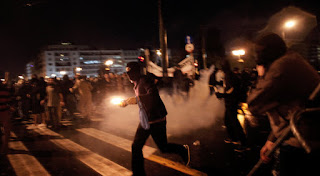 Amid some of the most violent demonstrations in Greece in months, the Parliament approved a sweeping set of austerity measures early Thursday that were aimed at keeping the country in the euro zone, but passage was so narrow that the government’s continued stability remained at risk.

After 14 hours of debate, the three-party coalition of Prime Minister Antonis Samaras held together to pass the measures, 153 to 128, after several lawmakers broke ranks. Eighteen members voted present, the equivalent of a blank vote, including 15 from the smallest coalition party, Democratic Left, which opposes the measures. There was one abstention.

After the vote, six lawmakers were expelled from the governing coalition’s Socialist Pasok party and one from the conservative New Democracy party

The measures — including sharp cuts to pensions, salaries and social services, as well as tax increases and increases in the retirement age to 67 from 65 — are expected, but not guaranteed, to persuade Greece’s foreign creditors to unlock 31 billion euros in aid, or about $40 billion, that the country needs to meet expenses.

A vote on the 2013 budget to activate the austerity package is expected late Sunday.