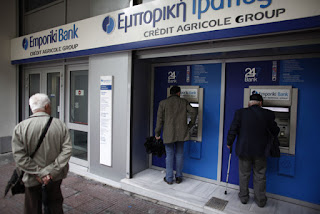 Alexis Pantazis and Emilios Markou are on a three-year odyssey to become next-generation car insurance executives in Greece that’s a million miles from their previous incarnation as bankers for Goldman Sachs Group Inc. (GS)

“One of our investors says you cannot wipe out a country,” said Pantazis, 36, a consultant at Boston Consulting Group before working as an executive director at Goldman Sachs from 2005 to 2008. “A country like Greece has 11 million people and these people need basic services. They need bread, they need milk, they need car insurance.”

As French banks Credit Agricole SA (ACA) and Societe Generale SA (GLE) sell their Greek units to exit the only euro area country that’s in need of a second rescue package, Pantazis and Markou see an opportunity. After swapping business-class lounges and sushi for budget flights and sandwiches, the pair began pitching their Internet-based vehicle policies to Greeks two months ago.

The Greek economy has shrunk 20 percent during the debt crisis and protesters took to the streets again this week as the government pushed more cost-cutting measures through parliament. Even with the contraction, the country’s per-capita gross domestic product was 26 percent higher last year than in Poland, the only member of the European Union to avoid recession since 2008, according to data from the Organization for Economic Cooperation and Development.