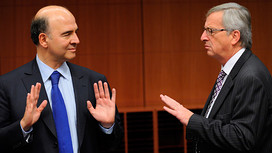 Eurozone finance ministers on Wednesday yet again put off a decision to extend up to €44bn of long-overdue aid to Greece, after failing to overcome lasting divisions over how fast to cut Athen’s mounting debt pile.

After almost 12 hours of intense talks that stretched into the early hours, eurozone governments called a further meeting next week to finally settle differences between themselves and the International Monetary Fund.

“I don’t know when [the aid disbursements] will happen,” said Jean-Claude Juncker, the chair of the eurogroup of finance ministers, as he emerged from the meeting. “Greece has delivered, now it is up to us,” he added, in reference to austerity measures implemented by Athens.

The delay shows the acute shortage of politically acceptable options facing ministers as they attempt to put Greece’s soaring debt levels back on track without having to writedown the face value of their bailout loans.

Officials present at the meeting said that, while some progress had been made, eurozone member states still had a variety of uncrossable “red lines” that put them at odds and would have to be relaxed before an agreement was possible. Ministers would return to capitals to discuss their negotiating mandates with their governments before reconvening next Monday.

More
Posted by Yulie Foka-Kavalieraki at 7:35 AM