Europa to the rescue 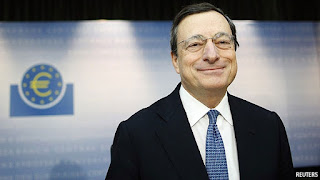 After the high drama of high summer, when Mario Draghi, boss of the European Central Bank (ECB), took on the financial markets—and won—recent council meetings of the ECB have been uneventful. Today’s high point was the unveiling of an abstruse video celebrating the introduction of a new €5 banknote next May, which seemed to perplex Mr Draghi as much as it did the journalists at the press conference.

Before that both the ECB and the Bank of England (BOE) had kept monetary settings on hold at their monthly meetings. The ECB council left its main policy rate at 0.75%. The BOE’s monetary-policy committee kept the base rate at 0.5% and decided against any further addition to quantitative easing (QE) following the completion of the £50 billion ($80 billion) increase announced in July.

Both central banks had their reasons for biding their time. In Britain the recession ended in the third quarter with an unexpected bounce as GDP grew by 1% (an annualised rate of 4.1%). With lots of special factors distorting recent numbers that surge won’t last, but the Bank of England has good reasons to be wary of expanding QE still further since more recent increases in it (bringing the total stock of government bonds purchased by creating money to an astonishing £375 billion, equivalent to a quarter of GDP) have been a lot less effective than the initial programme in 2009.