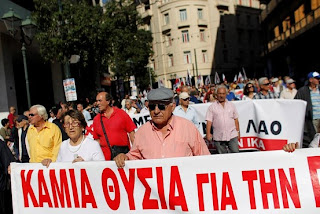 Europe's official economists cut their growth outlook for the region on Wednesday amid turmoil spawned by the euro-zone debt crisis, forecasting deeper recessions in austerity-battered nations and lower growth in France and even Germany.

The report from economists at the European Commission, the European Union's executive arm, depicts an economy with few bright spots. High and rising unemployment will drag on consumer purchasing power, as will government budget cuts aimed at mending ragged public finances. Export growth will be sluggish, the forecast said, while business investment was expected to keep falling as companies see little reason to spend on new projects in Europe.

The grim forecast comes amid mounting signs that Germany's industrial motor, the main driver of euro-zone growth over the past two years, is faltering under the strains of deepening recessions in Spain and Italy and lingering fears about a Greek exit that could blow apart the currency area. Industrial production in Europe's largest economy slid 1.8% in September from August, Germany's economy ministry said Wednesday, a steeper decline than economists had expected. 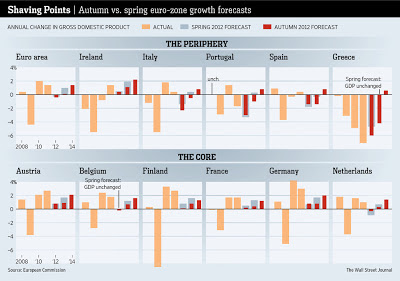 Posted by Yulie Foka-Kavalieraki at 11:23 PM