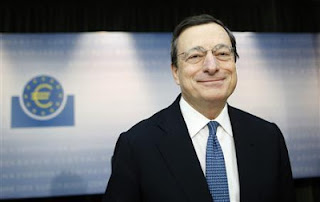 The euro zone economy shows little sign of recovering before the year-end despite easing financial market conditions, European Central Bank President Mario Draghi said on Thursday, leaving open the possibility of an interest rate cut in the months ahead.

But after keeping rates on hold on Thursday, Draghi said the ECB cannot do much more to help Greece with its debt burden and gave Spain none of the assurance it wants that ECB bond buying will lower its borrowing costs.

"The ECB is by and large done," Draghi told his monthly news conference when asked what the bank could do for Greece.

The euro zone is grappling to find a formula to make Greek debt sustainable, with Germany and the International Monetary Fund at odds over the need for governments and the ECB to take a "haircut" on Greek bonds they hold to make the numbers add up.