For an institution once nicknamed “It’s Mostly Fiscal” for espousing austerity during financial crises, the International Monetary Fund’s assessment in its World Economic Outlook (WEO) of threats from fiscal consolidation mark an important stage in a remarkable intellectual shift.

Some of the IMF’s critics – its demands for fiscal tightening during the Asian financial crisis of 1997-1998 created intense controversy and are still remembered in the region – are no doubt pleased to see the fund’s management sitting down to a fricassee of sacred cow.

Yet as far as its involvement in rescue programmes for Greece – and potentially Spain and Italy – is concerned, the fund will find it easier to change its mind than its policies. Its junior role in the rescue “troika”, alongside the European Commission and the European Central Bank, means it will have to convince its more sceptical fellow lenders that slower fiscal consolidation would be helpful.

“The WEO section on fiscal multipliers is a very important finding, which shows the IMF is a credible empirically driven institution which is not shy of giving up its own dogma on these issues,” says Jacob Funk Kierkegaard at the Peterson Institute think-tank in Washington. “But it is likely to make only a marginal difference in forward-looking changes to [rescue lending] programmes”. 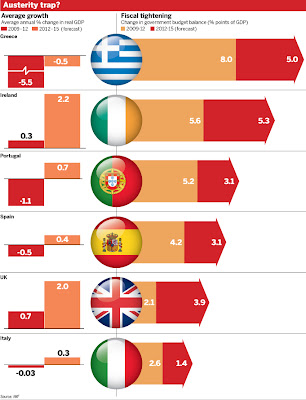