The IMF and the euro crisis: Less cash, more impact 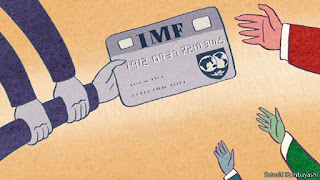 In 2006 it was hard to see a role for the IMF: a decade of stability meant its lending was falling rapidly. Not any more. The fund, which holds its annual meetings in Tokyo this month, has so far pledged $103 billion to Greece, Ireland and Portugal. That is already much more than during the Asian crisis of the late 1990s, when IMF lending reached $35 billion, and with a bail-out for Spain looming, the numbers could leap again. The fund counts 188 countries as shareholders; many are concerned both that it is lending too much to Europe, which is perfectly capable of looking after itself, and that it is conflicted because European countries wield disproportionate voting power at the fund. Are such critics right?

The fund has certainly become intertwined with European institutions because of the euro-zone crisis. It is the junior partner in a “troika” of institutions that have worked together on each of the bailouts; the other two members are the European Central Bank (ECB) and the European Commission (EC). The lion’s share of the financial support has come from euro-zone countries. That said, the scale of the IMF’s lending has still been remarkable. The IMF pledged €30 billion ($37 billion) to Greece in May 2010; big loans to Ireland and Portugal followed within a year (see chart). Each of these loans rivalled the IMF’s previous record, a $30 billion loan to Brazil in 2002.

But the charge that the fund has been spraying money around is unfair. Christine Lagarde, the IMF’s boss, has rowed back from the exuberant promise of Dominique Strauss-Kahn, her predecessor, that the fund would provide a third of the cash needed in the euro zone, and worked hard to win new IMF funding from cash-rich members, such as China. Support for Greece, Ireland and Portugal is roughly 10% of its total lending capacity of around $1 trillion. As a shepherd of its creditors’ cash, the IMF has been relatively prudent. 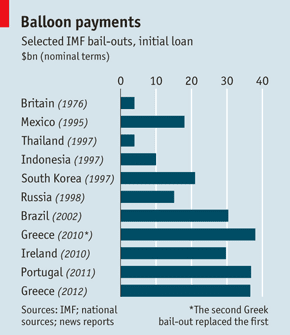 Posted by Yulie Foka-Kavalieraki at 5:09 PM

2013 has some optimistic forecast for Greece.