The fund warns and encourages

In its relations with its most powerful clients, the International Monetary Fund possesses “the right to be consulted, the right to encourage and the right to warn”. Walter Bagehot, the great Victorian economic journalist, gave this description of the role of the British monarch in the 19th century. I applied this phrase to the role of the fund in a paper I submitted to its 2011 triennial surveillance review. At the annual meetings in Tokyo, the fund fulfilled precisely this role. What matters, however, is that its members, above all, the US and Germany, act upon the warnings and encouragement they have received.

The warning provided by the IMF’s World Economic Outlook was that: “The recovery continues, but it has weakened. In advanced countries, growth is now too low to make a substantial dent in unemployment. And in major emerging market economies, growth that had been strong earlier has also decreased.” The IMF revised its forecast for 2013 growth in advanced economies from the 2.0 per cent it forecast in April to 1.5 per cent. For developing countries, it cut its forecast from April’s prediction of 6.0 per cent to 5.6 per cent. The performance of the US, with forecast growth of 2.1 per cent next year (just 0.1 percentage points lower than forecast in July), is expected to be far better than that of the eurozone, where growth is forecast at 0.2 per cent next year (0.5 percentage points lower than forecast in July), after -0.4 per cent in 2012. Even Germany’s economy is forecast to grow by a mere 0.9 per cent in 2012 and 2013. Spain’s is forecast to shrink by 1.5 per cent and then 1.3 per cent. The eurozone is a cage for masochists.

It is no secret why growth is slowing in high-income countries: this is due to fiscal tightening, weak financial systems and powerful uncertainty. This toxic combination is particularly threatening inside the eurozone, where, again no surprise, countries reliant on exports are affected by the shrinking economies of big trading partners. As the latest Global Financial Stability Report shows, cumulative capital flight from peripheral eurozone economies is more than 10 per cent of gross domestic product. Indeed, without support, principally from the European Central Bank, peripheral economies would have had to impose exchange controls. They might even have left the eurozone. The fear of break-up remains pervasive: it is always hard to make masochism a credible strategy. (See charts.)

So far, so bad. But even these depressing forecasts make two possibly optimistic assumptions. The first is that the US avoids the “fiscal cliff” created by its quarrelling legislators. If not avoided, this would impose a tightening of 4 per cent of GDP. Sane people know the result: a deep recession and, possibly, outright deflation. Can US legislators be that stupid? One must assume not. The second optimistic assumption is that “European policy makers take additional action to advance adjustment at national levels and integration at the euro area level. As a result, policy credibility and confidence improve gradually.” Will European policy makers be that effective? One wonders, even if they have been more decisive recently. 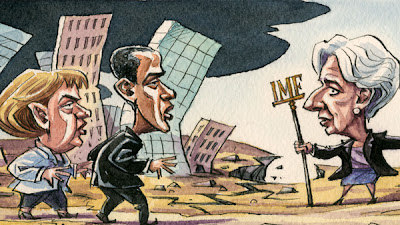