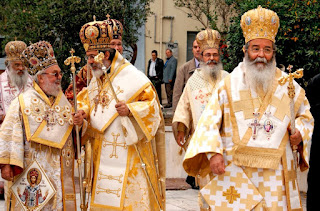 The Greek Orthodox Church has managed to cling onto many of its economic privileges, despite austerity stinging nearly all other parts of the country's society. But after numerous scandals have revealed corruption and embezzlement in the Church, more Greeks appear to be demanding sacrifice.

His Eminence, Bishop Anthimos of Thessaloniki, 78, owes the government back-taxes. A two-page letter from the finance ministry rests on his desk, next to a stack of religious texts and images of saints, informing him that he has €1,350 ($1,740) to pay. And, incidentally, his monthly net income will be cut from €2,200 to €1,930.

The bishop is one of the most conservative spiritual leaders in Greece, notorious for his verbal attacks on Muslims, leftists and gays. He feels threatened by creditors who are preying upon his country; illegal immigrants, whom no one can control anymore; and by those who are picking a fight with his church -- intellectuals arguing that the clergy, too, can afford to make some sacrifices amid the crisis.

"We've been doing that for a long time," Athimos says.

For years, many Greeks have been resentful of the fact that the powerful Orthodox Church paid very little in taxes up until 2010. It receives considerable subsidies from the European Union, in addition to support from the Greek government. Salaries for priests and bishops cost taxpayers about €230 million per year. It wasn't until a few months ago that the government started trying to whittle that number down.