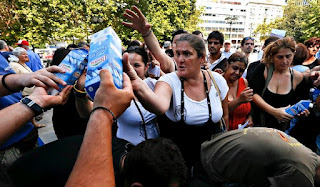 The video, which went viral in Greece last month, shows about 40 burly men, led by Giorgos Germenis, a lawmaker with the right-wing Golden Dawn party, marching through a night market in the town of Rafina demanding that dark-skinned merchants show permits.

Some do, and they are left alone. But the action quickly picks up, as the men, wearing black T-shirts with the party’s name, destroy a stall with clubs and scatter the merchandise. “We saw a few illegal immigrants selling their wares,” Mr. Germenis says in the video. “We did what Golden Dawn has to do. And now we’re going to church to pay our respects to the Madonna.”

Just a few months ago, the name Golden Dawn was something to be whispered in Greece.

But three months after the extremist right-wing group won an electoral foothold in Parliament, talk of Golden Dawn seems to be on everybody’s lips.

In cafes, taxis and bars, Greeks across the political spectrum are discussing the palpable surge in Golden Dawn’s popularity, which has risen in recent political polls even as the group steps up a campaign of vigilantism and attacks against immigrants.