Love or nothing: The real Greek parallel with Weimar

Of all the operas written during Germany's Weimar Republic (1919-33), probably the most haunting is the last.

Kurt Weill's The Silver Lake, written with playwright Georg Kaiser, tells the story of two losers - a good-hearted provincial cop and the thief he has shot and wounded - as they make their way through a society ruined by unemployment, corruption and vice.

After spending a week again in Greece - amid riots, hunger and far right violence - I finally understood it.

The opera was meant to be Weill's path back into the mainstream. It was his first break from collaborating with Bertolt Brecht, and was scheduled to open simultaneously in three German cities on 18 February 1933.

But on 30 January Adolf Hitler was appointed Germany's chancellor. 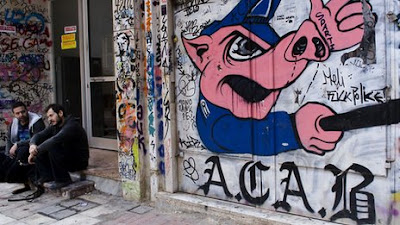 Posted by Yulie Foka-Kavalieraki at 8:35 PM