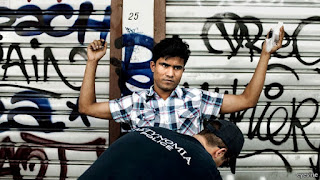 Protesters in wheelchairs jeered and whistled as officials from the “troika”—the European Commission, the IMF and the European Central Bank—arrived at the labour ministry on October 2nd to press for yet more public-expenditure cuts. Beleaguered Greeks are set to endure a sixth year of recession in 2013. Greek budget planners forecast a 3.8-4% contraction, the IMF a more pessimistic 5%.

Yannis Stournaras, the finance minister, is under huge pressure to find an extra €2 billion ($2.6 billion) of last-minute savings to appease the troika. Antonis Samaras, the centre-right prime minister, has an even harder task: persuading the coalition government’s left-wing partners to accept tighter austerity. Both still sound confident a deal will be reached, though the timetable is likely to slip by a couple of weeks.

Delays are not helpful for Mr Samaras. He has struggled during his first 100 days in office to keep his fragile coalition together while Mr Stournaras put together a €13.5 billion austerity package in return for Greece’s second €130 billion bail-out. At the European summit on October 18th, the premier promised that he would seek a two-year extension until 2016 for implementing the new measures, thereby softening their impact. But European leaders will not grant Greece’s request until the package has been agreed to with the troika and approved by the parliament in Athens. As a result Greece’s next €31.2 billion loan tranche, needed to recapitalise Greek banks so that they can start lending again, may not arrive until mid-November.