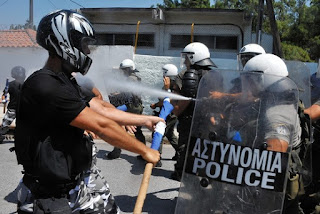 One of the hottest trades of the past few months has been the bonds of a country so shaken by economic and social turmoil that a neo-Nazi party is running third in the polls.

Ever since Greece completed a debt restructuring in March that turned €200 billion in bonds into about €60 billion, distressed-debt investors—many at U.S. hedge funds—have been picking them over. Hedge-fund analysts have flooded Greek finance officials with requests for information. Prices have climbed.

Third Point LLC, based in New York, crowed about Greece in its investor letter earlier this month, citing the resilience of the bonds of fellow bailout-recipient Portugal. "We expected Greece to keep its head up and undergo a similar metamorphosis," the letter said.

Other buyers include Greylock Capital Management, a New York hedge fund specializing in distressed debt that has been bullish on Greece for months, and Fir Tree Partners, a New York-based multistrategy fund with $8 billion under management.