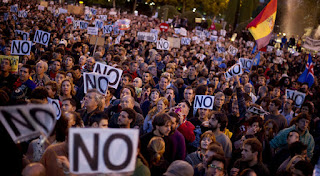 The differences in approach could not be more distinct — or telling.

Two of the most economically distraught countries in the euro zone, Greece and Spain, mapped out additional budget cuts last week.

In the case of Greece, under last-chance pressure from its international creditors, the governing coalition tentatively agreed on an austerity package that includes some of the most severe cuts in public pensions ever imposed in a developed country. Pension payouts to retirees would be trimmed by as much as 10 percent.

And then there was Spain, where last Thursday the government of Prime Minister Mariano Rajoy introduced one of the most draconian budgets in the country’s history. It was intended to reassure international investors and demonstrate the fiscal discipline that the euro zone was demanding of Madrid.

The markets need reassuring: Spain has a stubbornly high budget deficit, its banks require tens of billions of euros in rescue loans and the government may soon have little choice but to request European aid.