In it, MP Ilias Panagiotaros claimed Greece was "in civil war" and indeed advocated a new kind of civil war, pitting the far-right against migrants, anarchists, etc.

Within 24 hours Mr Panagiotaros had retracted his claim that Greece was "in civil war", saying instead "there is no civil war" and accusing Newsnight of "paraphrasing" his words. We had simply broadcast them, un-edited and in English.
“Start Quote

Now three new reports cast light on the substance of our story - which was: alleged police torture of anti-fascist detainees, Golden Dawn's influence inside the Greek police force, and its potential influence on the operational behaviour and priorities of the police in the Attica region around Athens.

Today, lawyers for 15 protesters who claim they were mistreated and abused in police detention, have shown Newsnight coroners' reports on eight of the detainees.

The most serious of the coroners' documents confirms "grievous bodily harm caused by a sharp and blunt object," requiring the victim to be off work for a month.

Another describes a kind of injury that is consistent with being caused by a taser, as claimed in the original Guardian report.

Fifteen protesters have told us they intend to bring a case against the Athens police.

A second report issued yesterday by the UN High Commissioner for Refugees contains figures for racial attacks in Greece, which are not routinely collected by the Greek government. 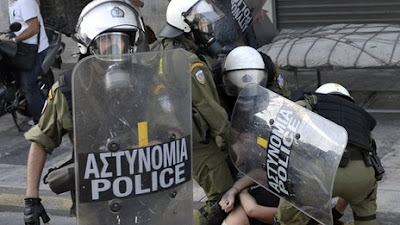 Posted by Yulie Foka-Kavalieraki at 9:54 PM