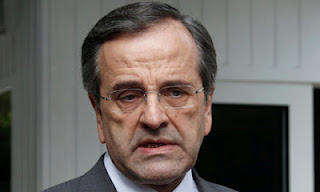 Greece is teetering on the edge of collapse with its society at risk of disintegrating unless the country's near-empty public coffers are shored up with urgent financial aid, the country's prime minister has warned.

Almost three years after the eruption of Europe's debt drama in Athens, the economic crisis engulfing the nation has become so severe that democracy itself is now imperiled, Antonis Samaras said.

"Greek democracy stands before what is perhaps its greatest challenge," Samaras told the German business daily Handelsblatt in an interview published hours before the announcement in Berlin that Angela Merkel will fly to Athens next week for the first time since the outbreak of the crisis.

Resorting to highly unusual language for a man who weighs his words carefully, the 61-year-old politician evoked the rise of the neo-Nazi Golden Dawn party to highlight the threat that Greece faces, explaining that society "is threatened by growing unemployment, as happened to Germany at the end of the Weimar Republic".

"Citizens know that this government is Greece's last chance," said Samaras, who has repeatedly appealed for international lenders at the EU and IMF to relax the onerous conditions of the bailout accords propping up the Greek economy.