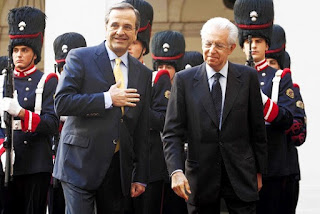 Greek Prime Minister Antonis Samaras is undergoing one of the biggest metamorphoses of his long political life: from shrill opponent of Europe's rescue plan for Greece, to the man the Continent's leaders now see as the best bet for keeping the country in the euro zone.

Since taking office in June, Mr. Samaras, a 61-year-old scion of one of Greece's most prominent families, has struggled to push ahead with €13.5 billion ($17.4 billion) in austerity measures to satisfy international lenders despite opposition on the streets of Athens and in Parliament.

So far, that has won cautious support from other European capitals for Mr. Samaras and his country. But the mood could sour quickly if Greece fails to swiftly deliver on promised budget cuts and restructuring plans delayed for months by political turmoil.

On Wednesday, negotiations between Greece and a team of inspectors from the European Union, the International Monetary Fund and the European Central Bank—known as the troika—appeared hung up on details of some spending reductions and proposed changes to labor-market rules.

European leaders are eager to avoid the costs of a renewed crisis with Greece as they try to protect the common currency and keep other fragile economies, such as Spain's and Italy's, from weakening further.

Mr. Samaras "is seen as difficult and he's tough. But those traits also mean he has the best chance of pushing through the tough changes needed," a senior European Commission official in Brussels said. "He's the best port we have in this storm. But that's not saying much, giving how much mistrust there is right now."