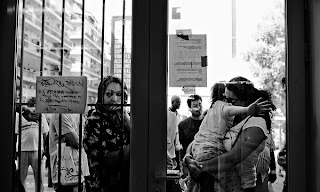 Greece’s government submitted its 2013 draft budget on Monday, outlining enormous spending cuts as the country’s foreign lenders returned to resume talks over a broader austerity package in exchange for the rescue money the country needs to meet expenses.

The draft budget spells out about $10 billion in spending cuts and savings for 2013. About one-quarter of that would come through reductions in civil servants’ salaries and social welfare benefits, and about 15 percent through cuts in spending on health, defense and local authorities, the government said. It also stipulates raising the retirement age to 67 from 65, but that is not expected to alter the bottom line in 2013.

The draft budget is expected to be revised significantly because it must be approved by the country’s troika of foreign lenders — the European Commission, the European Central Bank and the International Monetary Fund — before it can be submitted for a parliamentary vote.

The troika is insisting on further cuts in the public sector — including laying off public servants, a political third rail in Greece and other European countries — while the coalition government has been pushing back. The coalition, which consists of the conservative New Democracy, the Socialists and the smaller Democratic Left party, is asking Greece’s lenders for more time, saying such cuts are not politically or socially sustainable in the face of growing social unrest.